17/12/19  We Left Olite and drove over the top of spain to Moncofa on the Costa Blanca.

To Aire Pictured above. took us about half a day from Olite to here..4hrs or so..driving. stopped on the way for lunch at a truck stop..and then on..

As this water problem still persists..We had no time to explore Zaragoza as intended.  As with all our travels..something is always set to change your plans. So moncofa it is..

They have moved the Aire..off the tarmac parking lot..onto a purpose built one, with sand/gravel standing..and basic services..still almost in the same place..but a different entrance point..in fact the old co-ords take you to it..

Pitches are larger and marked out..before, it was a free for all shambles..Having said this..there was still a spanish van taking two spaces..one for his camper, and one for his table and chairs. Ah well, tis his County, and who am I to complain..except if it was the last place… We stayed a night. as weve been here before. and not much of interest for us now..but its a good Aire, sea is 500 meters or so from it..shops around the same the other way..Water, dump,  etc so a handy stop.. 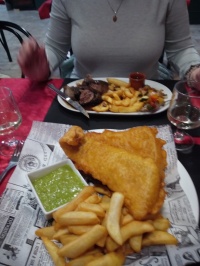 One of the more special places we love,..got most of it all..good bars, restaurants, plenty to do..etc. Free camping spot, not far from Scallops restaurant..And Scallops restaurant..Well!! we think great..best value for money we can find in spain so far. 3 courses, with a bottle of wine each..plus a free Breakfast Voucher each next morning..12.99 euros each 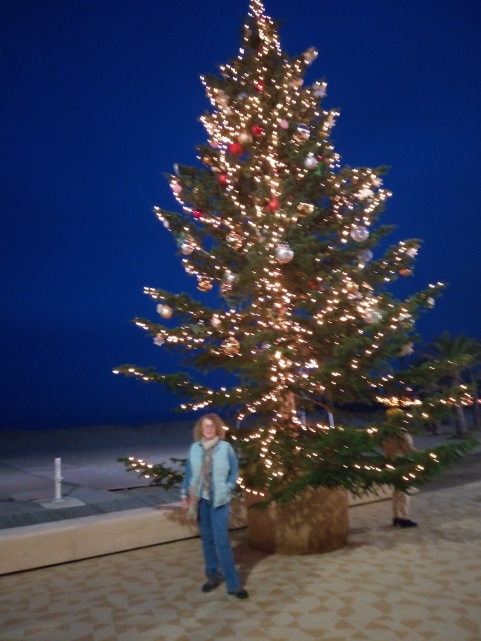 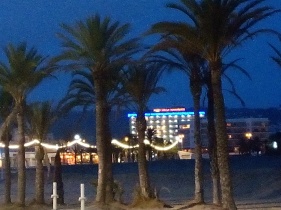 Left Javea and headed towards Benidorm , We are calling into The Expats warehouse just beyond at Villajoyosa,  to pick up a few bits on our way to Indalow camp site Near Vera.

I must add at this point, no new places added..except for Olite..which was Magical, Due to the crash we had in France, were unable to do much of the places we intended..but are instead heading for Camping Indalow, were we (Me) hope to fix Trusty ..well see.

a nites stop in Torrevieja..on the rocks, On the way to Indalo. documented in trusty 3rd adventure.. 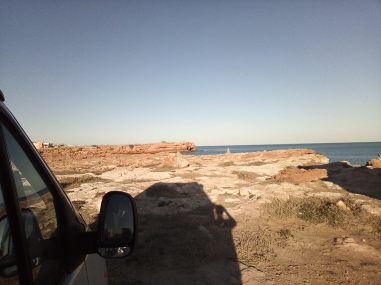 We made it. Sitting in the sun at the campsite

Whoopee do da..found the leak, and stopped it..Couldn’t take the risk on the road, stripping the rad etc off Trusty, as we might not have been able to continue..Especially in the foothills and nothingness off some of the terrain we traversed over..  As I said before..for the life of me, I could not see were the water was going..We could smell it..and had to put a liter or two every 200 miles or less. but no sign of dripping..

Well it turned out to be a tiny pinhole in a heater hose. that only leaks when engine coolant was under pressure. and as it was almost over the exhaust manifold..the heat dried it up instantaneously when we stopped..so by the time I got the bonnet open, it had disappeared..  Tricky AYE??. but its cured now I think. so maybe we can do some more exploring on the way, after christmas..we intend to stay here till boxing day, or just after.

Still here at Indalo. Trustys ongoing troubles are still evident..now, Developed a drip in the Radiator.. So we have decided after boxing day, which incidentally, they dont celebrate here..We are moving on Prematurely, to Portugal, where I know I can fix her..

She is not a happy Tranni..so we decided to cheer her up..and decorated a little.. 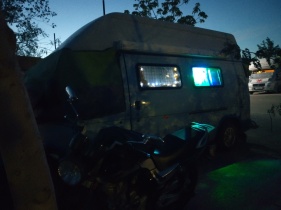 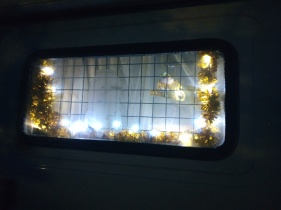 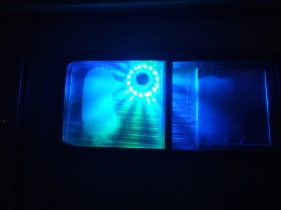 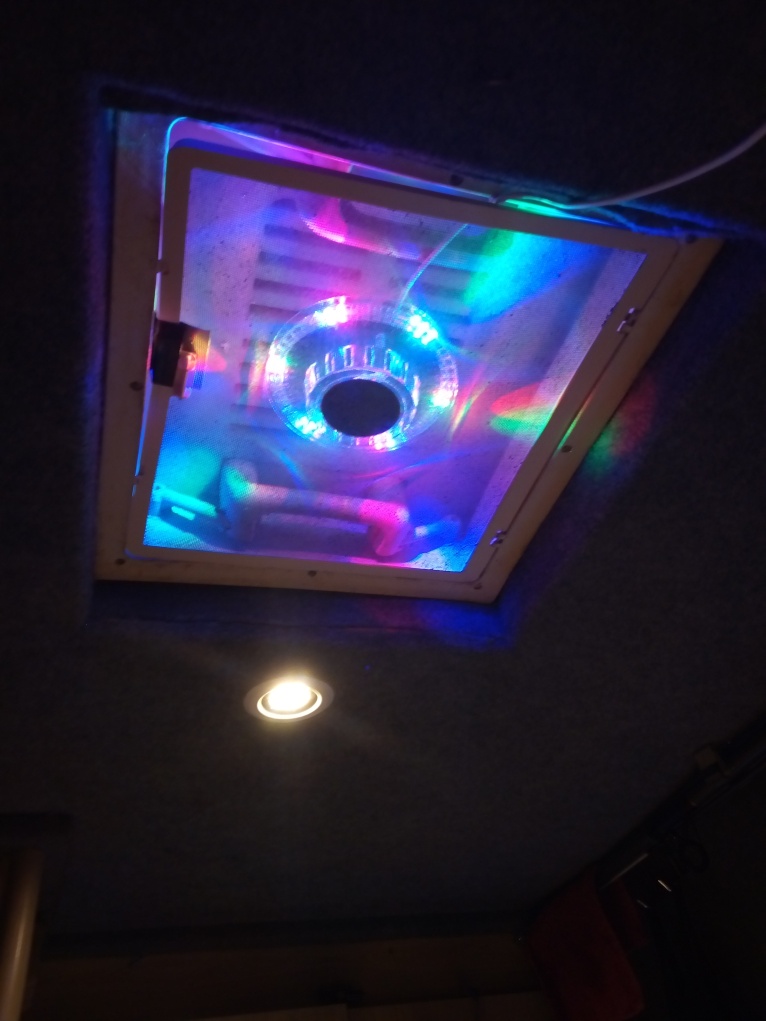 An update on camping indalo

If you have read our previous blogs, you will know that we stayed here in march this year, on our return to the UK to sort a narrow boat..The campsite offers a reasonable level of comfort for the price..Which is 10 euros a night and 3 for electric.. reducing to 9 a night for 4 days or more, and 8 for over 30 days..

However they also offer a month for 160 euros  which is better value..for long stayers. and 250 with electric. We were going to do this, again as we did last time..but owing to our bump troubles, we are only doing 8 days.. The site itself is quite good..has many tennis courts and a free gym.. The clubhouse/bar is good and at a semi reasonable price..we have had better and cheaper..but its affordable..1.50 half pint, 2 for glass of wine. Food is overpriced..

The not so Good

The campsite is divided into 3 levels, the bottom with reception and the best wifi..Middle also reasonable wifi..both on asphalt/tarmac..pitches. The top on sand and lousy wifi..and a long way from reception..this is where most of the long stayers are. 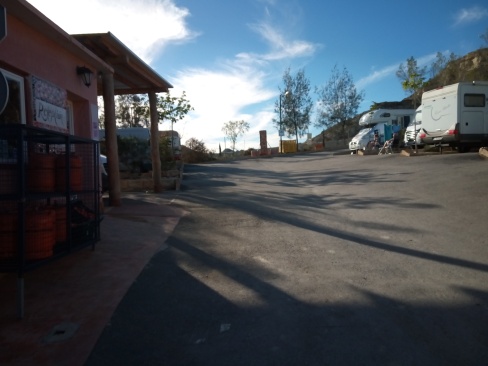 the walk or drive up to mid section and dump

Toilet emptying service are ok..and around half way between. but beware if you dont drive up a very steep hill to them from the bottom area. Be prepared for a hard walk up carrying a cassette etc. The top have their own..and two showers..but no use to you unless you’re up there. Overall, not a bad site..for Spain, price is right..many worse at 3 times this..5 8 miles from coast..but thats where you will pay.. 20/40 euros for not much better.

Lidl. Iceland, Aldi, are in vera town, around 3.5 miles away..and some of the cheapest diesel. in Spain at Vera Diesel.

We spent Christmas at Indalo as planned..and what a great time it was..not too quiet, but also definitely not too busy either. A good friend of ours..Phill who now lives on the site,,entertained us well..a few good nights we spent in his company..either in his place, or the bar..

Today I went on the hunt for spares for Trusty to get her sorted for onward journey..Managed to find a proper spares place, which sold K-seal, a copper in solution radweld..and it seems to have done the trick for now..So were off tomorrow around midday.

They gave me a price for a new Rad.. with 3 days waiting..for delivery, £200 with the vat…Ill nurse her through to Portugal, where its half of that..see how she goes, and make another decision there.

Finally left Phil and Indalo, this morning. around noon. Said our goodbye and paid our dues..Intended to move to Carbanaros..but when we got there most of the coast line is  industrial cement works..and although carbonaros looked ok..we couldn’t find a parking spot..that wasnt full, or didn’t look good, which is often the case with our travels..you have to be very flexible when Traveling, and we are. Two campsites slightly inland..El Rancho which we stayed at before, and a new one opposite. Been to them before. So we moved on to Cabo de Gata..20 miles further on or so. 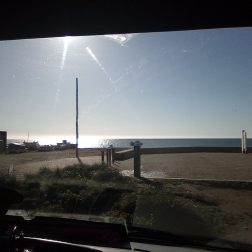 Been here before, but it was march earlier this year, and blowing a gale. Now it flat calm, lots more people about and 22 degrees. glad we popped back..only staying one night as we are heading for Torrox cost for the new year, hoping to get in..well see.

Moved on.  Arrived at Torrox Costa, and the place where we and many other motorhomes stay..Very central and quite large. Near to the Lighthouse.. Closed!!! ..and I mean Closed, Shut down by the local council, and police..to many people dumping black waste into a storm drain.

Stupid, Why dont they learn..Because it is behind toilets they think it ia sewer. but in fact a storm overflow drain..sewage ending directly into the sea..so another great place gone..So we opted to try the new Aire down the road, built this year. and with with good reviews..  Full to the brim with not so friendly Germans..more Germans than you can shake a stick at..Long stayers..hogging all the spots for all the season..

Im not anti German..but these definitely were not pleased to see us at all..so Grand Britannia and outta there. Shame really because it looks a good site..why they dont put  a time limit on it I don’t know!! A week would be fair..on a paying Aire, so other people could have a chance. at it..

We were well and truly flummoxed, This was our new years plan..spend it at Torrox which we like a lot..but now will strike off our list..also the big grass site at Nerja down the road a few miles..has suffered the same treatment..Its got height barriers and is shut to all except cars..

Oh dear this trip is definitely not panning out as we hoped. It was late evening with an hour or so of daylight. so where next..getting closer to the deadline of midnight on the 31st..

Jumped to park4night and found a campsite Further on and  beyond Torrox. Around 15 miles away .but again full.. so we opted for a Layby/car park next to sea. Pretty well full of campers as it was only a mile from the  campsite. but we managed to get in.. 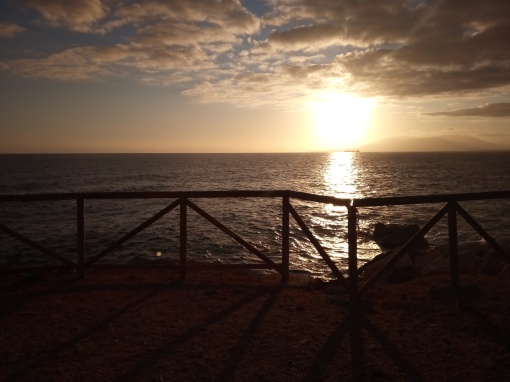 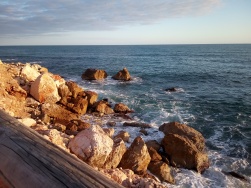 Woke up this morning after a semi noisey night in this spot..its got the main IP7 motorway above it..but tolerable. So where to go next..running out of time to find a good spot for new year..Getting closer to portugal . Anyway, messaged a friend in Portugal to tell him what we were upto, and he offered us this place. 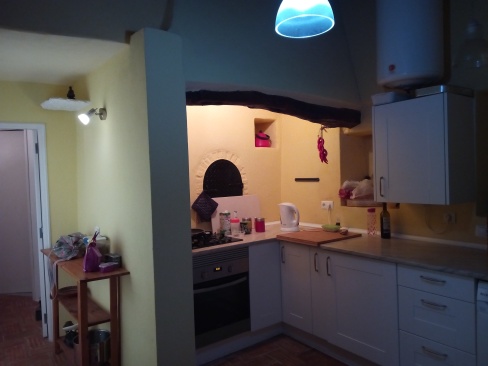 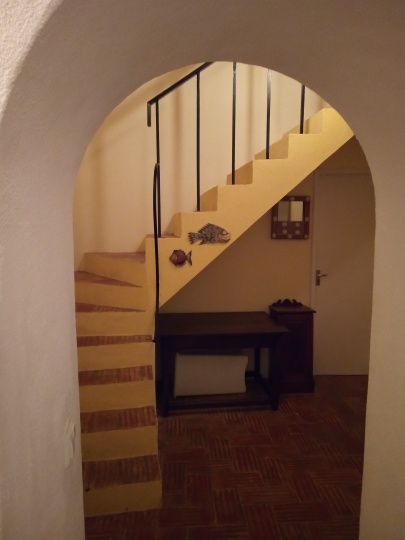 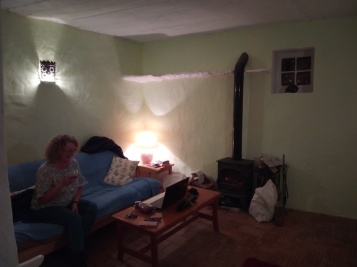 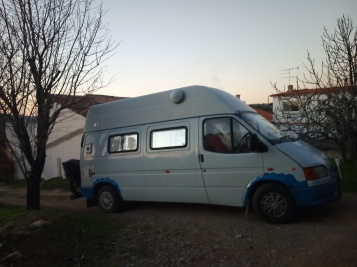 So a quick 200k dash to portugal and here we are..logfire and all the trimmings for 10 bucks a day..all in..a special m8s rate..loving it !!.

Spent our first night in the cottage just outside Loule Portugal, our Hosts are great, weve known Rob and Claire, for around 3 years and had a flat with them before for a while..They are Great people and Genuine.. New year tonight..so Probs off for a curry and then to a Queen tribute band down the road at Santa Barbara De Nexe..3 k or so..

Were going to stay a little while then over the next week decide where we’re going..I have stopped the water leak on Trusty completely..but Still looking for some parts to make a better job of her..Then onward and upward as they say.

Well there we were today, sitting outside in the sun new years day..Reading, which I normally dont do a lot of …

What’s That!!! Teresa says..its a dog..something in the tone of her voice jumped me out of the book..It’s a pig She says!! and standing at the open gate, was a big black pig…looking at us..Thats no pig as we know it hun,,says me jumping up..its a wild Boar!!!!

I kid you not..standing less than 6 feet away from us..right in front of our motorbike, was a real live Wild Boar..At first a large as it was, and the bike being black as well..Made it blend in..But as it moved and snorted Boy!! we new what it was.. So off  I was, to chase it off..Silly  because they are really Dangerous.

luckily it decided that I was the bigger threat and ran off. but only about 20 feet, and stopped by the front wheel of Trusty parked in the lane. Not having it..Even when I through a big rock at it..just stood there eyeing me up..So stupid here  shouts and swears at it.whilst running towards it.with another rock I picked up…It took off..I like to think it was fierce me that it ran from..but Im convinced it was the bad Language ..

Heard them in the wild..ate them..but never ever before saw one alive..leave alone 6 feet from us and large as life.. So no bacon for breakfast..it ran off, have to make do with scrambled eggs..

Watch this space more to come   Hopefully without so many winges ,Or Wild Boar.

BACK TO MAIN PAGE