Whilst Whiling away our time not travelling

I thought I would Write up this Blog about  My Narrow Boat Lynton Dreams in A land and time Far Far away.

This is one of my earlier Narrow Boats. For our latest one. follow the link at the end of this page

I and  a former partner sold the house and decided to buy a narrow boat Its around 16 years since I purchased  Lynton.  a 56ft narrow Boat, and 9 years since selling . I have seen her since a few times. Re-painted Blue and white. Called the Norseman now. Doesn’t suit her. Not the name, but the livery. But of course not mine to quibble about any more.

As she was after I finished Her 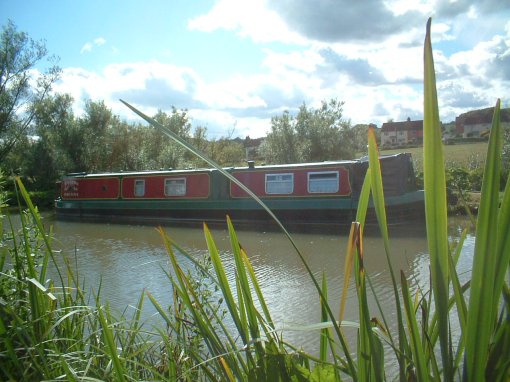 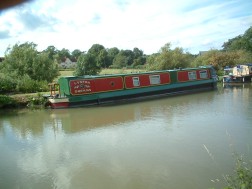 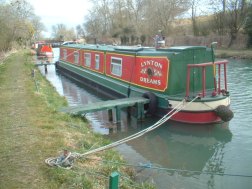 Its an alternative life style to Motor homing. A 20 Ton steel motor home on Water. And if you are considering it, the following may help.

When Myself and a former Partner bought her, she was a different boat to the one you see above. I spent many months converting her.

She Was also called  Pole Pole, which is Swahili for Big and fat and slow, so I was told  by the previous owner. He came from Manchester, so dont know where he picked up Swahili

Boat as she was when first Purchased 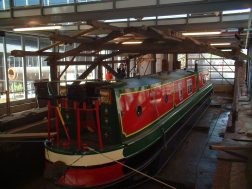 Pole Ple at Anchor in Banbury Wharf on first Visit. Prior to inspection and purchase

Anyway didn’t like the name or the layout, so decided to change it all, once I bought her.

We looked at better boats in my opinion..and ones I would have bought..as at that time after selling the house, we could have gone further upmarket, but as events turned out..good job I was persuaded to buy her..by my former partner, because she like the layout..

The original cost with full hull black, inspections and boat certs, £32.000 Bargain. Guy wanted £38.00 but the fact I am a mechanic and also not Dumb, in spite of my slight midlands accent, I had spotted many things he was lying about or just did not see or have the knowledge. I prefer to think it was the  latter. but sure it was the former. So a big knock down.

I Wasn’t  a motor dealer among other things,  for nothing  And they were  desperate to sell her because he had put deposit on another boat and only had one mooring. so that helped a lot.

So we set sale from Banbury so to speak after receiving the Keys and final paper work. I had decided to move her off the Banbury canal. To the Kennet and Avon, where I  had secured a British Waterways mooring in Great Bedwyne.

Rarer than Hens Teeth these But We were lucky. Through a Friend. we managed to jump the waiting list. Foul !! I here you cry..well.. yes, but all is  fair in love and war, and Boating.

Note .. Its almost a must to get a mooring before the boat. unless you intend to continuous cruse. Also worth noting.  You are entitled to stop most anywhere in the winter. once they start closing stretches and locks. any other time you must be actively moving to another part/town etc.

The trip from the banbury canal to the K&A as they call it. involves Going to the Grand union or Grand Onion as boaters like to call it, onto the Thames then down stream to the lock for the K&A.  Or back along the Banbury to the Thames and  downstream to The K&A lock. We did it this way to save fuel and get used to the boat.

Mooring in Bedwyn as we first saw it

Lynton Dreams with her new Cratch cover at Bedwyn

We kept this as our base and went on massive trips from here.

Built the pontoons ourselves..asked British Waterways if it was OK..got a shrug of the shoulders, which I interpreted as a yes…could have been a no!! but I deemed it a yes..It was really needed here, as the banks had eroded badly and the boat was laying in a couple of feet of water, but the edges had eroded to less than a foot, which would be a problem if someone forgot to close paddles on the lock gates..

And guess what!! someone did..when the stretch drained..Lynton sat in mud on the bottom..two other boats tipped at their moorings..and when someone noticed and refilled the stretch..one did not right itself and sank..  The joys of Boating

I wont include Our trips as too lengthy for this info blog, But just say the Adventures were great.

First pictures below here are of Lyntons interior before I re fitted her. 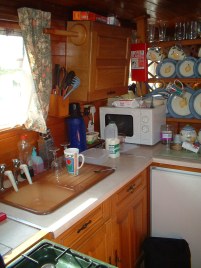 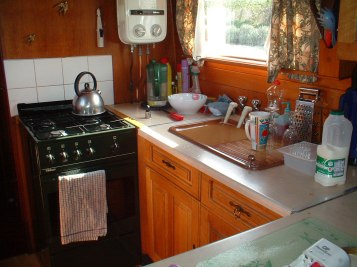 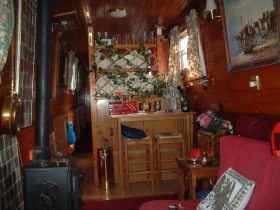 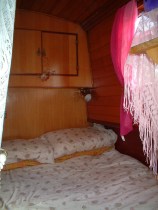 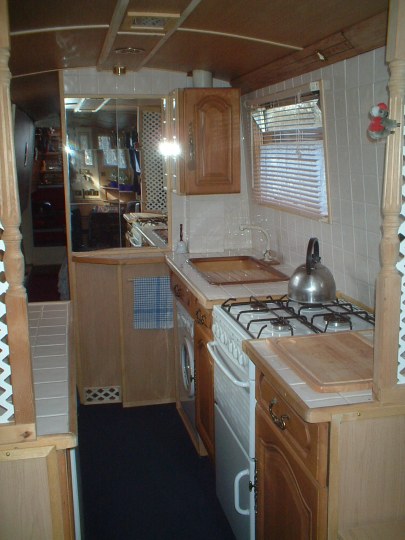 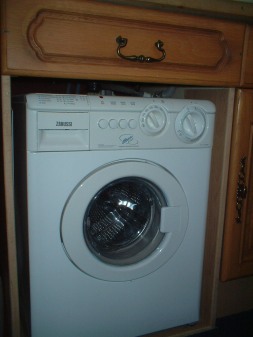 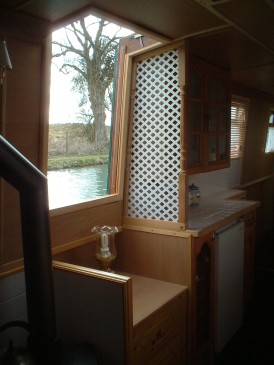 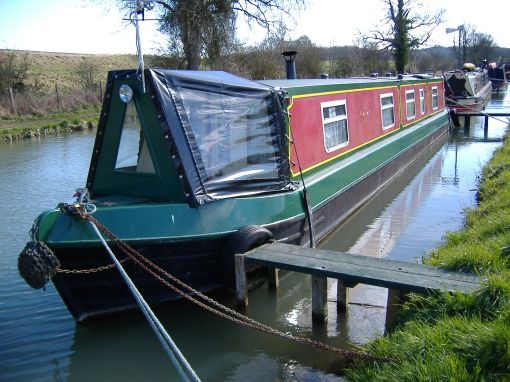 Most of the Materials for the re-fit..came from skips, and begging and borrowing..second hand, and used stuff from other places, and Bankruptcy stock. etc. It gives you an Idea of what can be achieved , with a few starter skills, ingenuity. and years of  making do, and altering stuff, for our use.  I believe they have a fancy name for it nowadays. (RECYCLING) We used it for years, Well before it was popular, or necessary, learnt it from My Parents and Grandparents,

A lot of the materials involved where scoured from Skips,  Some very expensive houses around Great Bedwyn..and its amazing what they chuck out when re-fitting them..Virtually all of the kitchen and some of the living room were sourced from these skips outside their houses..The solid oak  and glazed doors. being all from one house. as were the cupboard carcasses. The light ash paneling came from a reclamation yard..£2 a sheet..Absolute bargain. Washing machine..eBay..£40 buyer collect.

Virtually every thing you know see in this boat, was hand crafted/altered to suit, By Me, (big head) The grand total of doing this re-fit this way was around, £1500 and 3 months, 7 days a week. On the canal side.

Nice one Tone !! Pat Pat on the back from myself. Came in handy as I had to stump up half of it on the split up of our relationship. but to be fair, it was only fair. All in all a great episode in my life.